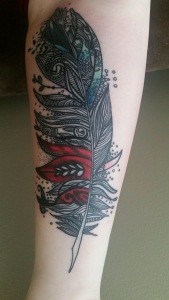 Friday afternoon, I sat in a shop for four hours and got my first tattoo since 2006. It was my fourth tattoo. I knew it would hurt. I was surprised, however, that I was ready to stop immediately after the artist began. Right before he started, I said, “I’m nervous.” He looked me in the eye, smiled, and said, “Of course!” Like, why wouldn’t you be nervous?

Before this I got small-ish, black-only tattoos that took about an hour. This tattoo took just about 3.5 hours straight, no breaks.

At one point, I looked down after he finished the outline and I thought, “oh good, he’s almost done! That’s an hour and a half down, we should be done in no time.”

But, here’s the funny thing. I missed a bunch of stuff. When I handed the artist the photo I wanted on my body forever, I hadn’t noticed all of the complex lines and shading. When I looked down at that outline, I thought, “that looks about right.”

I was so wrong. Two grueling hours of shading and filling and coloring wrong. But I wasn’t struggling, not visibly. I wasn’t grimacing or crying or anything. Most of the time, I sat there with a smile on my face, zoning out to whatever music was playing, maybe humming along during the parts that hurt the worst.

I did cry at one point, but it was when I let myself consider that the artist had seen so much more than I did. I had a kind of a realization then – that’s his job, he’s the artist. He’s the one who will see what underpins the design and makes it something moving and inspiring. And I got emotional. I got choked up with gratitude that he approached his work with the intent of getting it right in that way.

I’ve always felt kind of weird about the way I notice every little detail of life. Inflections, expressions, tones, hidden meanings, even intent, in some cases. But I realized, sitting in that chair – that’s my job as an artist, as a writer. So I’m going to get back to work. I’m going to notice the details and fill them in no matter how much it hurts. Nobody sees the world with my perspective, and I’m going to do my best and then put my art out there in any way possible.