“Don’t let anyone tell you ever that you are supposed to stop mourning and missing people you’ve lost. What a crock. Our beloved people are forever…Leonard Cohen wrote that there are cracks in everything, and that’s how the light gets in. Stay cracked; don’t let people shame you into using caulking.”

I wrote this post over 5 years ago, and I saved it in my drafts folder because I didn’t want to post anything too depressing, too down. I went through the effort of writing it… and frankly, Anthony deserves all of the writing I can give him.

It’s been just over three months since you died. I honestly thought I might get used to the fact that you were gone. Instead, you pop into my head almost every day. There is always something that makes me wish I could talk to you. Maybe it’s a crazy story I wish I could tell you, just to see that look on your face that says, “no way.” Or some personal victory that I know you would be proud of me for…like hitting my -100 pounds goal.

Some days when I just want to take a walk with you and laugh until I feel like I might fall over.

I feel like I am finally out of the rut I was in when we started walking back in June. What I can’t tell you now is that the sheer force of your friendship levered me up to a place where I could get out. The walks in the rain, the jumping back from dead snake skins, the time you told me to call you when I wanted to eat Zingers, the constant stream of text messages back and forth, the sitting on your enormous couch and hearing you tell a story about me for the first time that you remembered for 14 years.

What I thought when we reconnected and started our walks last year was that I was going to be a good friend to you. I was going to be there for you, no matter what you needed. But you didn’t need anything from me. Instead, you gave and gave, and sometimes I actually feel a little bit guilty because of all of the problems you listened to of mine, all of the advice you gave me, all of the support and encouragement you gave me.

I can’t remember giving you anything.

Actually. I gave you something that was hard for me to give. I tried to act like you weren’t dying. When you first told me that you were sick, you said, “don’t cry for me. I have had one hell of a good life.” When you called to tell me what they found in your brain, I held the phone upside down and sobbed, open-mouthed and silent, while you gave me the details. I talked about it cooly, in terms of facts. I joked that you just had to be an overachiever by filling yourself up with tumors, you couldn’t just settle for one.

The last time we talked on the phone, when I was supposed to come visit you in the hospital the next day, at the end of the call you just said, “Draker. Thank you.”

I knew then that we wouldn’t talk again.

I knew I wouldn’t see you the next day, or ever, after that.

I have a couple of pictures of you on my fridge, and sometimes when I walk by I feel weird for having them there. I printed them off your Facebook profile when we first started walking, and I actually used to have them hanging on my cubicle wall at work as reminders. Reminders to pray for you, reminders of what your smile looked like, reminders that there existed on earth a staggering depth of strength inside of one human, reminders that whatever I was facing, I could do it.

Sometimes, I feel weird for having them there. But most of the time, when I walk by, I just say, “Hey, buddy. Miss you.”

I’ve been doing just about anything you can imagine to put off writing this post, about this topic. Even as I type, I am still in my workout clothes, there is a strand of lights that has gone dark on the Christmas tree, and my in-laws are coming for Christmas Eve dinner at 4.

Basically, last year on Christmas Eve, I was in a casino hotel, getting ready to spend the day playing slot machines and maybe sitting by the pool. And just relaxing and trying to enjoy the last bit of 2012, which was just as hard as 2011, 2010, 2009, 2008, and 2007. Every year for the past few years, I have sent the year off with animosity and a hearty “good riddance.” 2012 was shaping up to be the same.

On Christmas day, I woke up ready to drive to my parents’ house for Christmas dinner. When I got there, I had a Facebook message from my friend Anthony’s cousin. I knew why she messaged me. Anthony had been in the hospital for several weeks, and when he told me he was back in, he made it clear that he was never returning home. She asked me what I was doing, if I was with family, and I lied across the board because I knew she would only tell me what I knew I was going to hear if she thought she wasn’t ruining a Christmas gathering.

She called me and neither of us spoke a word. Finally, I managed to force a whisper, “I know.”

I did know, because someone had already posted about it on Facebook. I had checked my phone before I left the casino. The thing about losing someone is that even when you’re expecting it, even when you knew it was coming for a long time, when it happens it sucks your stomach to your eyeballs and takes your breath away and every other cliche that you can imagine. Punch in the gut, hits you like a brick, hits you like a train.

Except, it all happens at one time, and all in one half-second you get broken apart.

What Anthony’s cousin told me was that he died on Christmas Eve, probably while I was playing slots a few hours from him. She told me that he was ready and that he was at peace.

That was a year ago. I think about the kind of guy that Anthony was, the kind of friend that he was, the strength of his moral code, his sense of adventure, his humor, his love of fishing, his love of music, his love of St. Louis sports teams, his loyalty, his memory. Not just the memory of him, but the way he remembered the events in our shared history with meticulous detail.

We walked, Anthony and I. When we reconnected, I knew he had cancer and I knew it was bad. I asked him if I could do anything for him, but literally all he wanted to do was take walks. He liked to get out of the house, get moving. We walked last summer, sometimes 3 or 4 times per week, for a total of 21 times.

We walked in a local park that has a weird little pond, and sometimes people would be fishing in that pond. Anthony said he would never fish there. “What am I gonna catch in there? A dirty diaper?”

This morning, the snow was so heavy that I drove half the distance to my destination in first gear. Normally, on a day like today, I don’t leave the house. I see multiple inches of snow on the car, on the ground, and I think, “no way.”

But today was different. Today was the funeral for a dear old friend of mine whose battle with cancer has finally ended. I won’t say he lost, because he didn’t. He was released, and for his sake, I am thankful.

I can’t seem to write about this, or him. The words are clunky and weird, and they are too heavy to line up straight.

But I loved my friend so much. His presence, his conversation, his laughter, and his friendship over the past 15 years made a difference in my life, and I will miss him dearly.

…was getting this little guy in the mail today as part of a larger gift:

I love the low, muted clatter of a teacup on a saucer as I hold it in my hand, trying to keep it steady. This morning I pulled down my only teacup and my only saucer to make myself some Earl Grey tea. I don’t use the teacup on a regular basis. Actually, until July, it was packed away in the box it came in – a gift box that I received over three years ago on my 30th birthday. Until today, it has never been used.

The teacup is absolutely beautiful to me. I have never been one for girly designs or dainty and delicate things. I don’t like flowered patterns or china. But one fateful day, when I was living in Nashville, something happened to me that changed the way I felt about teacups, at least.

A Saturday lunch date with a dear friend of mine, L took a turn for the divine. We decided that, rather than just go for any lunch, we should go to the Savannah Tea Company for a full tea. I have never had a tea of any kind, other than a cup of tea, so I had no idea what to expect.

It was wonderful. Scones, clotted cream, jam, finger sandwiches, soup… and it was all presented with such care. Everything was lovely, down to the shape of each finger sandwich. Eating made me feel like I was participating in an art project. Every bite was magical. Every sip of tea was smooth and golden.

And my teacup. Oh dear.  My teacup. It made me swoon. I loved the intricacy of the pattern. The color. The shape. Honestly, I thought that if there was ever a perfect teacup made, then I was holding it, drinking from it, and admiring it. 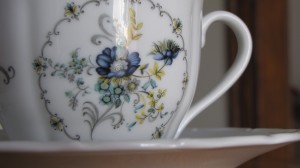 And I can’t even talk about the creamer.

My dear friend L, noticing my enthrallment, returned to the Savannah Tea Company after our tea and bought me the cup and the creamer for my 30th birthday.

And this morning I decided that I had looked at the teacup I have had on display since July one day too many. Life is short, my friends. I want to use the beautiful things I have, not simply look at them. I want to pull down my beautiful teacup and feel the happiness I felt on that enchanting day at the Savannah Tea Company in Nashville. I want to remember the way my eyes welled with tears when I opened the gift from my dear friend, L on my 30th birthday.

I want to remind myself, even on this small scale, what it is like to be overcome by beauty, overwhelmed by the intricacies of life, and overjoyed at being known well.