I’m not even going to check the date of the last post here. Because what matters, beyond the guilt for not writing anything at all (except Facebook statuses) for month after month?

Right here, right now, I am doing what I should be doing. I am avoiding my phone and the Facebook neck cramp that sometimes comes with too much scrolling, too much input. I am opening my MacBook and heeding some advice I received from a friend and hero…something along the lines of, “Writers write. Period.”

So I have been wrestling with this idea lately. And by lately I mean for like a year or two. Am I even a writer? I don’t write often. I don’t feel like I have ideas, ever. I occasionally have a strong opinion about something, but it floats in casually, and floats out on my next breath. If I get worked up over something, it might be something at work. Today I actually laughed when a disgruntled consumer sent me an e-mail recommending that I “go and suck donkey balls.” My only regret was that I couldn’t reply to his clever suggestion… have to stick to the scripts, you know.

But what makes someone a writer, really? Of course, writing. But maybe believing that it’s possible, too.

When I was in my senior year of high school, I had a weird downward slide and I stopped doing homework in the middle of the marking period. Before that, in my creative writing class, I was earning more than 100% on everything I turned in. After my little slide, my creative writing teacher and I used to actually get into yelling matches in the hallway over the assignments I wasn’t turning in. I didn’t care. I just wrote him off as an ass and completed my little slide, undoing a lot of my GPA in a few months. I limped through community college after that. One day while I was still in college, I ran into my old creative writing teacher on my way into the mall. I was embarrassed; he acted like nothing was wrong and just asked me what I was doing and what my plans were. I informed him that I was going to be a writer. That was my career goal at 19.

He stepped back and gave me an assessing gaze. I bristled, so sure we were about to fight again like we had in high school. Instead, he said something along the lines of, “I think you will. You’ve got the moxie to do it.”

I swear. Those few words haunt me. One time, one person believed that I had what it took to write – to really write. I had a few more encouraging words over time from professors and poets, but none struck me quite like those. Because “moxie” was never a word I would put with myself. I have always just kind of… existed. Floated along. 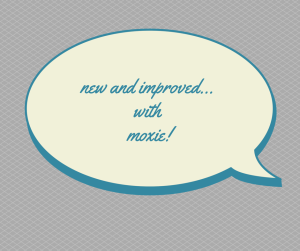